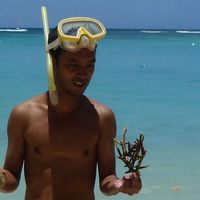 Basically I'm not the type of CS who one normally expects to meet. I'm not scruffy. I don't play Bongo or Jumbo. I'm not a hippy-like character with bad rotten teeth. I hate when I don't trim short my beard, and I always like to have my hair cut short. I don't think that traveling makes you more mature or bigger (considering all the dumb folks I know and who travelled a lot). BTW, apparently Kant never left Koenigsberg, but nonetheless he wrote brilliant stuffs (bourgeois lifestyle-helping though). I hate hitchhiking, unscholarly music (except jazz, remember that Miles Davis went to Juilliard School of Music), downgraded culture, slang, opportunists and fanatics of every kind, ghettos, witty illusions, laziness and slack, fake artists (old boots stuck in a violin painted with organic cat piss coloured with onion peel), regression...

I already make 2 good friends on CS and one of them is my best friend.

So many out of so many.

I'll learn some german but I need the basics.

I'll share food with you and we can play music together - I have a guitar.
I teach you piano on a Danish made one 1981 and introduce you to classical music.