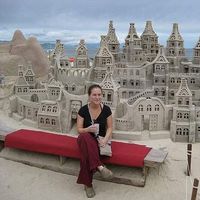 to incorporate my love of spontaneous travel and sharing travel experiences into my future life &amp; career

I was born in Israel but grew up near Washington, DC. Studied anthropology as an undergraduate, but somehow ended up in Silicon Valley for four years working at a tech company. In 2011, I took off and traveled in Asia for 6 months, before moving to Brooklyn for a year and finally making the move to Tel Aviv in late 2013. Did a Masters degree in Migration Studies at Tel Aviv University. Moved back to the US and Washington, D.C. in 2016.

If we were meant to stay in one place, we would have been given roots instead of feet.

I've been on this site about as long as I've been on Facebook, which is saying a lot... Every experience (see below) has been worthwhile and memorable in its own way. As you can see, I have not hosted or surfed in a while, but I am open to doing it again in the future - in the meantime, I have connected with the CS community in DC and attend events from time to time.

I can help you learn English, Russian or Hebrew. I can share my knowledge of Silicon Valley and the tech world, at least my experiences of living and working there for almost four years. Of course I am always happy to share stories of my travels.