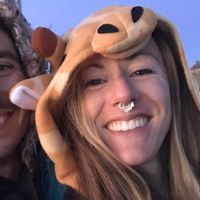 Will be traveling around starting in Portugal in October 2022 and seeing where it takes me. Likely going to one country per month. Particularly interested in experiencing new cultures and getting involved in water sports. I've hosted and couchsurfed while living in South Africa, Brazil and South Africa and now looking to get into the international community again!

To be curious about others. The world needs more listening and less telling.

I grew up in Los Angeles and went to college in Portland, OR. I am a very chill, laidback person who loves to have a good time. I'm a bit of a free spirit and I take life as it comes. I love adventure sports, dancing, yoga, music, health, and fitness.

I became super passionate about traveling and learning about other cultures when my uncle married a Malaysian woman and my whole family went to Malaysia for the traditional Iban tribal wedding. This really opened my eyes at a young age (10 years old). I lived in South Africa for a summer during the World Cup, spent a year teaching English in Thailand from 2012-2013, taught in Rio for 5 months and then traveled for a month throughout Brazil in 2015.

Whenever choosing between to do or not to do, always do (but be smart about it).

When I lived in Thailand, I hosted travelers all the time. I really enjoyed meeting people from all over the world and forming lasting friendships. I'm currently not participating in couchsurfing but would still love to meet up with travelers or couchsurfing members.

I lived in Chumphon, Thailand for about five and a half months and hosted several travelers along with my housemate and fellow couchsurfer, Chris Tonks. We met some awesome people and loved learning about where they came from, their travels, and life in general. I have met some of my favorite people in the world through couchsurfing which has only inspired me to become more involved in the community. The great thing about couchsurfing is that you are only on it if you enjoy helping and learning about others.

Books: SHANTARAM. I have yet to find a book that's even near to matching it's magnificence.

Movies: I'm the worst LA native. My movie knowledge is embarrassing. I don't watch a lot but I love psychological thrillers and documentaries.

I had an internship in Cape Town, South Africa working for a youth development organization in the townships. This internship just so happened to be during the World Cup. Best experience ever.