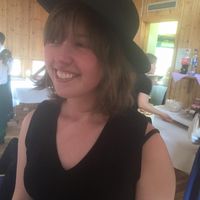 I would call myself a social person. This mostly involves drinking, playing games, walking or hiking.

To mention a few, I reject authorities, capitalism, materialism, sexism and war. I fear climate change, right-wing extremism, western governments, deforestation, Google and alien invasions (kudos if you get it).
I don't think there is much hope for the future, but I find it comforting when people feel otherwise

...but don't get me wrong; I got a good heart and a charming smile.

I've surfed in Russia, Dublin, Buenos Aires, Mexico, Guatemala, Spain and Peru. I have hosted some. Only good experiences!
I've also gained friends from CS events and by sending out, or answering, requests to meet/travel .

La Alhambra in Granada, driving through northern Italy's mountainous landscape, driving across Norway (many times from Oslo to Tromsø), hiking to Ciudad Perdida in Colombia, reaching the summit of Acatenango in Guatemala right when the volcano Fuego erupted, researching and cruising around the western coast of Spitsbergen, travelling with the trans-Siberian to Ulan Bator and chicken buses in Guatemala.

If you want to learn biology, languages (Scandinavian, English, Spanish or the Cyrillic alphabet) or guitar.