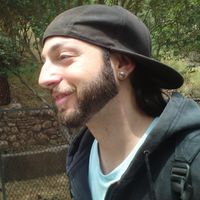 Trying to find out/discover/explore my mission through this world.

Heya people, Ø
My name is Takis. Tucky is a funny/simplified English version of my name. I come from Athens, Greece and above all, I love to travel. My studies were on Tourism Management faculty of Patras, a city in Western Greece. I spent and dedicated time during my studies by writing projects covering a broad variety of fields about tourism and travel. Stopped uni for some years in order to work, travel,and to explore my self inside life, before finally graduated. Some years later, got through exams into Msc studies in Sociology, where I am at now,

I 've changed many jobs during my life, on tourism sector and other fields too, stability is maybe not for me. Whatever it was, odd jobs, various projects, jobs with tie, public sector, either private, doesn't matter, experience counts in case you know what I mean. :D Ι am usually very social, and always up for some nice conversations, but I also enjoying being alone sometimes, even usually. Anyhow, independently of the situations you have to face, you can almost always improve your life, and deal with, just believe it. Everybody who really respects himself/herself and so on others, is very welcome! :) Looking forward to meet people.

*Currently living it in Athens, Greece, most of the time at least.

Read and heard so many positive infoz about it, so i decided to join. If you are about to visit Athens or Greece in general, you are very welcome to meet if there is time, I can show you around many places, something which I really like. With people met until now, we had som really nice conversations, either talks, drinks, fun and jokes, walks, played some basketball,went to parties or made some music together with some other friends. Depends on your personality, I'm interested in having good time always if possible. Hope the same for you :D

Before learned about CS, I liked to travel alone and meet people at the train, the ferry, during my trips in general. I've met some nice people who hosted me and I hosted someothers also, without being registered at the site. When I learned about it, I started both traveling and hosting. I I ve been to nice places around Greece, Estonia, Italy, Germany, Holland,Spain,Uk, Norway and finally Denmark,where I was studying somewhen as an exchange student. During this period, I 'm mostly organizing Couchsurfing meetings and parties among other events, something which I responibly enjoying , and I tend to believe that participants and colleagues also do so.
*And now, at 2020, is the New Era of Cs, I'm again back 'n the game..! Not into hosting for the moment, though willing of showing around the city, in case I got some time above work pressures and time needed to dedicate for expenses for necessities.

Hip hop music and music in general is something which I really like. My preferable style is freestyle rap, I 've been into rap scene, where still am I and will be, but I like so many other genres too. I can go to the studio, have organised events, also played as a DJ, at some local bars.

For those into the culture, got basements at sounds as an oldschool 90's boom bap fella.. While improvizing it though, could move towards other styles, even up to the new sound, depends though on lyricism,context, also vibes,

I also like sports - I play (used to actually :) table tennis at a local team. After that from time to time basketball, maybe soccer, maybe gymnastics, also watching some games. Also I like biking, some running and long walks. Exercise is so healthy, trying of doing more, and combining with healthy eating and sleeping habits, when and while possible,

What else, I like funny talks and serious conversations, have been a lot into nice jokes and parties. I love social interaction with people it can be so funny and interesting most of the times., though some loneliness is also vital for me.

List of interests could be endless for most people I suppose at least, because in this life, we are also players. It could be something spiritual as well. You should just respect hobbies of other people. My exgirlfriend was not doing that, so I broke with her :D

The butterfly effect is one movie which I like a lot. Limitless was another one. Science fiction and social movies mostly have been watched by me.
I like many documentaries, favourite subjects are geography, history, humanity, etc. Also some cartoons are nice. But most of all, rap videos.

I listen as much hip-hop as I can, started by listening Greek rap and afterwards also rap from many other countries. I like also rock,nu metal, funk, reggae, trance whatever is energetic happy deep meaningfull, and makes you think or dance. Dance is nice too, I can dance almost whenever I would like to actually :D
Just in case of feeling so.

About bands and artists, there are so many to refer, by not mentioning others, I've got sounds from Eminem to Linkin Park for instance,
could be also Irie Maffia, Ace of Base, Metallica, Culture Beat, Caparezza,Natasja Saad, Bomfunk Mc's, few examples, list is endless,
I love writing lyrics also, and texts in general, and should do more of that one day I guess,

About books, I can read for many hours while other periods I don't even open a book, just looking at pictures. Because it reminds me of bureaucracy.. Historical, narrative, travel literature,biographies, nouvelles, sci-fi, whatever. I could move from Stoic philosophers to self help spiritual books, up to Jules Verne and Normand Spinrad. Influenced also from comic strips, like Garfield the Cat, Donald Duck either Astérix le Gaulois.

Also, being for hours up on a screen,after a while, is against physiology. But I never say no on reading and researching maps of Greece, Europe, the World Atlas, etc., Wikipedia and more . Yes, I can feel insecure many times about what's going on in the country, and in general in our planet. But we are also a part of that though.

I think it's so subjective to say what's ammazing and what's not.

Work, travel, studies, experiences, everything has offered you something.
Ok, yes I admit it I consider a lot of things which I've done "amazing", too modest don't you think ?

I don't know seriously what to write here,
-maybe random conversations which changed something inside you,
-deep moments of feeling connections,
- also when survived from difficult or strange situations.

Feel like knowledge can be found everywhere each single second, from every talk, look, thought.

Like talking about so many issues, preferably with people who can balance speaking and listening.
As a stoic philosopher from antquity named Zinon used to say though, ''We got two ears and one mouth, we should listen to others double of the time comparably to that we are speaking''. Nuff said for now. :)

Making jokes and laugh and having fun and speak and expressing, is so important and something which you can also mentally do for your health :D Is okay being nostalgic too some times though.

More or less, haha, I could try to share with you some walks around the city, talk about this great city of Athens, go through social situations and life experiences, parties, music, sports, whatever s going on,

In the end, I am trying of being better person, dealing wth my flaws and healing into my soul. And when managing so, then is about spreading energy, love and whatever is coming from the interconnected source we are all located probably in.

Further details could be provided through personal messages.

I am not able to host Couchsurfers during these days, but I would like to meet up and also can dedicate some time in showing and exploring around the city, depends on what they are interested in, what they do like to see. I always like to discover new places. Because travel is my passion. One of them at least!