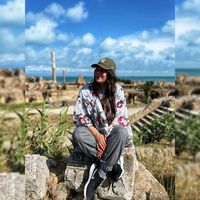 First of all, I would say I’m an outgoing person. I like to go to events and exhibitions. I enjoy to hang out with friends, drink beer and to have a philosophical conversation.
A few years ago I became a hitchhiker and since then I live a minimalistic lifestyle. When I’m not on the road I like to read in my free time.
I work as a caregiver for disabled people and I’m studying social work at the university of Essen.

"At any street corner the feeling of absurdity can strike any man in the face."
Albert Camus

The first time we hitchhiked to Paris, we camped spontaneously in a borrowed tent at the Place de la République during the Nuit Debout demonstration. From there on I realized that hitchhiking is the most authentic and adventurous way to travel, so I simply kept at it. From there on I thumbed lifts to Spain, Hungary and Scotland.
While crossing the borders with truck drivers in Calais towards Dover, we got involved into a interrogation.

Once I ended up unplanned in Breda, in Netherlands at midnight, two stranger's offered me an accommodation in their student dormitories. The other time we were unlucky and we slept under a bridge in Maribor, in Slovenia.
While I was in Morocco I met randomly another backpacker whom I traveled together for a month. In Morocco we were looking for a roof over our heads - like just a floor to put our sleeping bags on - and we got surprisingly invited to a villa at the countryside of Essaouira, where we got served wine and couscous. During my travel through the USA I was so broke that I had to sleep two weeks on airports and two other weeks I did Couchsurfing.

We can share a good conversation, food &amp; drinks and exchange travel experience.