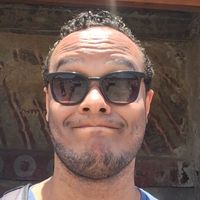 Enjoy my life the best way possible, travel around the world and meet remarkable people on the way.

I'm a very happy dude who is making the most of life! Making friends is one of the best things in life, so I take it very seriously. I hate to let my friends down. I'm also very talkative, so people hardly see me silent. I like sports a lot (like soccer, volleyball and gymnastics) and I used to go running. I’m desperate need of exercise right now! Haha. Well, that's a bit of me.

I do whatever I want as long as it doesn't hurt those around me.

I love hosting as much as I love surfing. So, if we're compatible, things will work out and you'll be able to stay at my apartment. Also, I'm in Couch Surfing because it's a cheaper way to travel to the places I wanna get to know. Besides, it's the best way to exchange experiences and learn more about other’s cultures. The best outcome of Couch Surfing is that we end up being friends with the person that hosts us/we host.

I pretty much like almost all kinds of music and movies. I like comedies and thrillers a lot though.

* Iguassu Falls! Wow!
* Going to the Colosseum was an undescribable experience.
* Road trip from Wisconsin to Louisiana on spring break.
* Volunteer program at FIFA 2014 WC
* I saw Simone Biles perform her skills at the Rio games

I wanna learn about new cultures and talk about mine.

People are welcome to use my facilities, such as laundry and kitchen.