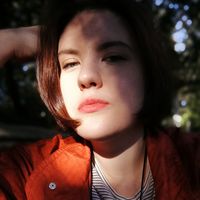 Just moved to Tbilisi on a whim :D

I've always loved being surrounded by people from different cultures. I guess I could say that I thrive in that kind of environment, so I seek it everywhere I go.

Working on a film set - I've been assisting/translating on set before, and it was the most fun experience ever! In the future I want to be a screenwriter and to direct documentaries.
Going to and working at film festivals
Going to the movies
Meeting new people

My taste for cinema has changed greatly over the past few years, but the films I will probably always have and always will love include "The Matrix" and "American Beauty".

I am also loving creative documentaties.

I think I have yet to do that

I can show you the hidden gems of Almaty that only some local people know of. This city is full of surprises I keep discovering every day.