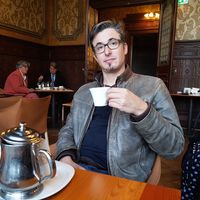 Open and fun, i'm curious of all is visual, sound or the two. I keep my spirit in other cosmos but enjoy of him, it's pleasant. I travel since young, so i'm accostumed to have contact with strangers. I'm amazed with little and i'm fascinated with beautiful thing. I'm a graphic designer and i have a huge culture in contemporan graphic design; the same for music electronic. I'm not customed to bore and less when i'm travel.

Offered a smile, a handshake is often stretched the beginning of a beautiful meeting.
Opening to the world, it's to feel free oneself.

I live really good moment in amazing place with awesome couchsurfers!
I use Couchsurfing more for meet other traveler in the place i visit.

I had travel in New York, where i discovered the couchsurfing community. I don't sleep in host but in hostel for a month. But i passed amazing night with couchsurfers, mostly the thursday at the Rivival bar. I was able to made contact when I arrive in the big apple and quickly, I feel less alone.
Then Montreal handed me his arm to live a fantastic summer.
Every year, I'm in Namur for the Kikk digital art festival and it's really pleasant to meet also local people.

I love social film with black humour.
world music deep house, electro, rap french/us and a lot of other stuff ...
I make a blog about the slow down version of trap music : www.triptrap.fr

The major salt in the Andes in Argentina, which are huge sea salt.
The concert of Dave Clarke at Halle Tony Garnier in Lyon.
The day of the year in Turin, Italy which is outside with big concerts in the squares.
A season of skiing in Valloire, where I worked with lifts and where I've been snowboarding for over four months.
Another season in the Mountains in a lovely little resort in the valley of thirst.
Concert Mix Master Mike to Keep in Lyon.
Holidays in the ocean below Bordeaux (Carcans) in France where I visited a decade to meet people around the fire on the beach at night.
Fireworks every Saturday on the bridge of Montreal during all the summer.

The love of art and music.
The way to be aware in a big city to enjoy everything it offers.