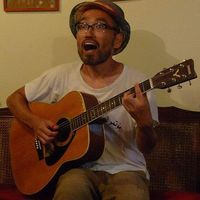 My unlimited World tour since 2007
was stopped by Croatian border police and court in Nov,2011.
So I was hitchhiking with a guitar in JAPAN, then finally the day I leave Japan has come again but my friends didn't believe it because it was "1st April" :)

eat or sleep than think

I send CS-requests to hosts then don't get any answer. I reply to CS-requests from travelers then they get disappointed.

knocking doors at random in any country without CSing.org

Whole my lifetime is spent only for watching Movies or traveling. I don't need Musical playing devices or instruments,it's always playing in my head. I have been drowned by sea of printing types of Books.

I spent a night with an alchemist (in Syria).
I hitchhiked a fairy of forest (in Sweden).
Bono of U2 made a song for me (in Ukraine).

Although you Learned "Japanese people eat sushi everyday", I Teach you "It's wrong", so we can Share the feeling "How much we're misunderstanding commonly!?"