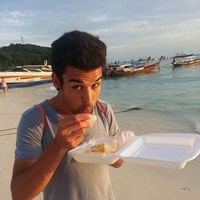 I am an easy going, laid back, open-minded guy from Germany. Let's grab a beer, have a coffee or a snack. Don't hestitate to drop me a message.

Live in the present and never forget: what goes around comes around.

I now and then meet up with fellow couchsurfers, hosted one, surfed some couches... to be continued!

I am a Malaysia and Indonesia die-hard! It's my passion and occupation in all regards.

Music: German and Old Skool Hip Hop but basically open for everything from Iron Maiden all the way to Norah Jones... unfortunately still stucked in the late 1990s and early 2000s (let's make a 2000s Party!)

I learned walking when I was a little kid... it's awesome!