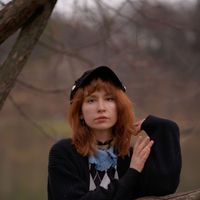 For those users who send me friend requests without explanation: I do not accept them from people I don't know. I just don't see the point. If you want to befriend me, write a message at least, letting me know why you liked my profile and what kind of common interests we have. Otherwise it's no friendship, is it?

Proudly consider couchsurfing to be a lifestyle.
When people defy all the laws of the capitalist world and not only accomodate you, but spent time, energy and more to share the passion to their village/town/city with you, it is magical. It does make me believe in people. I met people of all genders and ages, religions and beliefs here, and of such wonderful occupations I've never dreamed of. Concerning how introvert I sometimes can be, I'd never be able to meet them all unless through CS. As a child I was more interested in books, than in real people, but it turned out that people's lives and experiences are more fascinating than some books. And more versatile, probably.

I'm a rather laid-back person, with respect to other people's opinions and am always glad to listen to a story or two, or be engaged in an interesting discussion. If it's about politics I'd probably understand very little, but can agree with you anyway. X)
Can always talk about natural spiritualities, stone circles, animals or traditional festivals instead. Or Japan. Oh yes, any time.

I would love some travel companions, and the fact that it didn't happen before doesn't discourage me. Otherwise I love travelling solo, hiking and wandering around a lot.

Respecting nature and people is important for me, I'm a veg and would appreciate if you keep it in mind.

It's like a drug: once I tried and simply can't stop ever since.

I enjoy hiking, travelling and reading, folklore, celtic mithology, sci-fi, astronomy and Japanese popular culture (perhaps too much). And learning something new every day.

It depends on the mood and the books I read recently.
To make the long story short, it's mostly fantasy and detectives.
Doctor Who, Merlin, Father Brown, Jeeves and Wooster and other funky British series
The whole lot of known and unknown anime, but mostly Gintama and JoJo addicted
Books: Strugatskie, Tolkien, Pratchett and Gaiman
Music: Sound Horizon, utaite and numerous folk-rock bands like Faun, Skyclad, Melnitsa, Subway to Sally. And j-rockers, whom normally no one knows.

I like both telling and listening stories.
Can definitely teach that wonderful Russian mother tongue of mine. And Japanese. And German.

I can cook borsch for you (though it can actually take hours), or anything vegan. And keep a good company.
Anyway, they say I'm kinda helpful in a household.