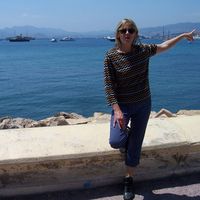 CURRENT MISSION
to get to know more about this paradoxical planet i happened to land onto :!)
ABOUT ME

I've been travellllllllling, discovering, sharing, .... and working too, in various fields to enlarge my knowledge of our world :a)

I heard of CS by late 2007, someone i met while traveling cheerfully insisted that i joined. However i hardly used the website until mid-2010, then i started to get active within CS Paris from mid 2013, when i randomly happened to 'save' a group of about 100 CSers, that an event 'organizer' had carelessly abandonned without any notice :s
I've been involved in CS by hosting, by joining some events, also organizing some (exclusively non commercial ones) such as free outdoor cinema festivals, picnics, walking tours, etc. . .. CS is great, but seems that some wrong-doers also like this community, so to have discernement is always helpful ;) …

If that can be of any interest, even though i'm French I don't drink wine, neither other alcohol beverages, this simply because i disrelish the taste, ever had. And it's cool this way as i'm anyway nicely naturally elated *s*

I live in beautiful busy Paris and also equally in sunny gorgeous windy Provence. A mix of urban life and a profound link to broad natural landscapes.
I can't host anylonger at the moment due to lack of space in my parisian nest, and lack of time when in Provence.

i'm interested in who someone really is rather than what he/she looks like or pretends to be :!
I enjoy knowledge of all sorts, i tend to be a kaleidoscopical person :p) ecclectic, active, pacifist, ecological, reliable, creative, humorous, musical, sporty,
Among loads of activities, I enjoy to hand-make things (i can drill, hammer, paint, plant trees and supportingly watch them grow :i) i often create decorative and/or useful objects, I also can turn small places into convenient spacious-feel-like ones. got an artistic streak (don't we all after all :?! ....)

NB: Unlike some people (...) I only send or accept CS friend-links from people whom i have interacted with in person

Minds are like parachutes they only function when open
let's smile, it's legal and free
less can be more (sounds surreal yet is true :!)
forget about competition, go for complementarity
Make your life a dream, and your dreams a reality

HOW I PARTICIPATE IN COUCHSURFING
by hosting when i can, by participating to events, and/or organizing some.
suggesting, offering, humouring, good-guessing,
by helpingly give info one needs or wants that i happen to know about :)

COUCHSURFING EXPERIENCE
i maybe should write a book on the subject .... :i

I feel a deep respect and interest for Native Americans
http://www.ted.com/talks/aaron_huey

the written words' world is part of mine, almost as much as spoken ones :).

knowledge and rewarding practice on how to reduce, re-use, re-cycle :)
Sociology, economics, Geo-politics and related topics
taste and skills in (interior, exterior) design and decoration,
getting to say 'thank you' in as many languages as possible ^^
etc .....

to give info about the area, to share interesting talks and friendly laughters :p