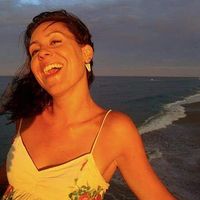 I have two sisters, and they are the best part of me. Their names start with D, just like mine . So does my mom's, and her two sisters. If your name starts with D, I'll probably like you too! Mostly I like everyone, so that's not required.

After traveling, the thing I love most in this world is to read. I also like to share my favorites with friends to see if they feel what I feel, or maybe different, which is beautiful too.

Let's share breakfast and walk my dog together! I come from a dog family and now I have one of my own -- a little babe with a mohawk named Brandy. She will probably wake you up with kisses so I hope you're ok with that, my surfers!

My sense of humor is sometimes weird or corny, but I'd like to think I'm pretty funny. I love making people laugh - laughter is always the cure. To everything! Ask me to tell you my number one joke - it's about bees. By the way, I really love bees! My dream would be to find a way to work them into a sustainable model of agriculture so we stop killing our environment, our bees, and ourselves ... Gardening and growing green things is so peaceful.

I write sometimes, not as much as I'd like. Mostly about dreams, or things I wonder about. Perhaps we can sit in a park and write together. Or walk down random paths and trails, I am always down to head outdoors. Plus we can bring my dog! We are kind of a package deal.

Road trips and wild nights are my glory. Once I was laid off so I drove to California. I'll never forget the people I met or the food I ate. I want to always have that sense of wonder and adventure, no matter where I am or what I'm doing. I hope we can meet, then we will be part of each other's stories.

I believe that people are good, until they are bad. Letting strangers into your home is good!

Meeting people from all corners of the world and sharing in new and exciting experiences with them!

First I dressed like a zombie in Oslo, then I ate homemade pizza in Perugia. Now I host folks and show them why I love my city.

I'd like to know if the pyramids were really built by aliens.