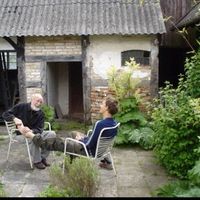 I live in Osaka and love Kansai. I arrange free meditation events as well as other events around be Kansai, and one of my favourite things is to bring good people together.

Couchsurfing is all about co-creation.

I live in a friend’s house, so it is impossible for me to host atm,but I'm happy to meet up and do stuff together, and hopefully I can help you have some great experiences here Kansai.

Because the most memorable part of traveling is the great friendships you make, and there are so many great Couchsurfers.

Six years ago I moved to Japan in the pursuit of work, and I succeeded at establishing myself in Japan. I do feel blessed to have taught English to so many amazing Japanese people, which is incredibly rewarding.

Earned a Masters in Australia.

Worked as a cameraman and with communications on a documentary filmmaking projects, which was a tactical step in creating South Korea's first Buddhist pilgrimage, which will run 500K through Korea, from temple to temple.

Lived in a Buddhist martial arts temple in South Korea (Golgulsa), and have also lived in Kyoto, in Seoul, in Australia, in the Czech Republic and in Norway.

Was chased through the jungle of Indonesia by a huge orangutang. But that's another story (and I don't know how amazing it was) (but it's amazing to be alive).

I would be happy to share with you the meditation and asanas &amp; pranayama (what is commonly referred to as 'yoga') that I know. And sharing Kansai is one of my great joys; I'd be happy to show you some awesome beaches and rivers around Kansai, and introduce you to my friends.