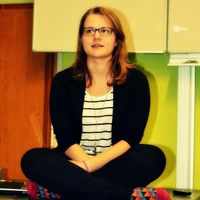 A wide-eyed idealist originally from a cute town somewhere in the Czech Republic. Interested in everything you have to say or share, always keen to learn new stuff.

Meeting new and interesting people when I'm travelling makes my trips way better than they would have been otherwise. I've never encountered a nicer community and so far I've only had great experiences with Couchsurfers, so I got addicted to meeting and hanging out with them whenever possible.

It doesn't matter if I'm the host or the one being hosted, or if we're just going to grab a beer - I'd always love to hear your story!

As an amateur musician, I don't really have a favourite music genre, it usually depends on my mood. So I can find myself listening to some Nina Simone's songs, then moving to Avenged Sevenfold and end up with something Mozart had composed.

Since I'm a bookworm who enjoys and cherishes every minute spent with a book, it's hard to pick a favourite one. Nevertheless, I can read anything by Stephen King, Terry Pratchett or J. R. R. Tolkien.

Right after finishing my tedious high school, I packed my backpack and moved to Aalborg, Denmark, which was the best decision I've ever made because I instantly fell in love with the city as well as the country. So if you're wondering what country to visit next, come to Denmark - and sorry for all the rain.

I can definitely teach you some obscure Czech phrases. Or we can rant about politics. Or music. Or books. And I promise I'll try to take a beer with me.