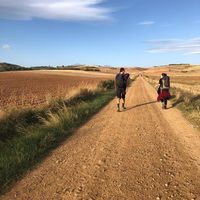 Well, hi there :)
Let me introduce myself.
I'm a person/human/animal... a fellow earthling on this planet

Here is my Backstory so we can skip the smalltalk, eventhough I don't believe in smalltalk but thats a story for later:
The first 8 years of my life I spent in Russia (Село Весёлое-Городовиковский район) . I grew up on a farm with pigs and cows and animals everywhere. But then my family moved to Berlin, Germany and I became more of a city person.
After graduating high school (nach meinem Abi) I spend a year in Maryland, USA and worked as an Au Pair.
It's where I joined couchsurfing.
Over the years I had some opportunities to travel a bit more and meet a bunch of great people along the way.
Being on couchsurfing did help :)

I'm an on and off couchsurfer, depending on my life situation.
Unfotunatly I dod't have the space to host travelers, yet. But we'll see what the futur brings.
But I had the opportunity to meet and connect with cool people throuth surfing and couchsuring events.

♥ I took a Semester off of Uni and travel with my sister through Australia, New zealand and Thailand

I think I am too young to teach anybody anything.
But we can chat about the world and the life we are living and eventually learn from each other in the process ¯\_(ツ)_/¯

funny stories
(I don't know how but I manage to stumble over anything and fall down, pretty often)