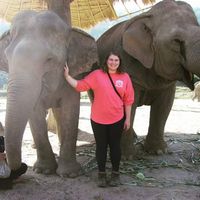 During uni I was fortunate enough to do fuel cell research abroad and was able to do a bit of traveling. Now all I can think about is where I want to go next.

I've stayed in hostels but wanted to try another way to have a cultural exchange. I've gone to CS events in a number of cities while I've traveled and looking to start hosting soon.

I love the outdoors. Swimming, hiking, biking, snorkeling, stand-up paddle boarding, you name it I'll try it. Also a coffee addict and avid foodie that used to brew beer. Let's grab a coffee or drink or some food and chat!

I like a variety of music (rap, electronic, country, folk). I also love movies. I don't have a favorite genre, I usually watch whatever I'm in the mood for. On a given day that may be an action, chick flick, or comedy. I love mystery books. My favorite authors Janet Evanovich and Catherine Coulter.

In 2014 I visited the town in Germany that my grandfather lived in before it was taken over by Nazis and my family received my great-grandmother's china that had been stored with neighbors for over 70 years.

I love to cook and have taken a variety of cooking classes in the countries I have visited. Let's share stories over a nice meal!