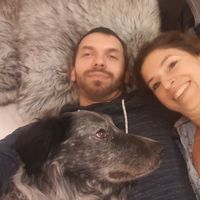 I discovered Couchsurfing by a friend, during my trip in Australia and New Zealand.

It's just a fantastic way to meet some people from over the world, to learn about new cultures and lifestyle.

I gave up for a while couchsurfing, but I would like to use it more and meet a lot of people, from Reunion and anywhere.

I practice Sport. I finished a ultra trail in Reunion Islande in 2019 (169K), and très to do some triathlon
I like all sports, and more particularly football, i'm a big fan of the Lyon's football team.

I played music also, saxophone. But I had to stop it because of the work who take a long time and I have to work on weekends. Hope to be able to use it again, in the future.

I can listen all kind of musics. I'm totally opened for discovering.

Once my studies were finished, I left my family to go to Australia for 1 year. I was 22
For the first time, I was in charge of myself..