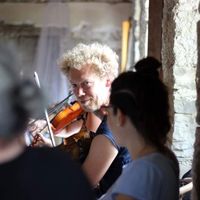 Because I like playing this useless mind game in which you watch the people around you to deduct a (fictional) personal history. That peculiar scar on his right ankle, for example. Or the way she holds her cup of tea with her 2 hands folded neatly around the cup. Or the exaggerated interest in which he reads his horoscope in that glossy magazine whilst following the words with his finger. He frowns when he reads the part about the sagittarius, he scratches his ankle. He asks if she wants more tea. She shivers.

I like traveling because its somehow easier to end up talking with this nice couple sitting next to you.

IMPORTANT:
To me couchsurfing is an exchange. It is not about a free bed.

Please insert the word COFFEE in your request to stay, so I know you read my profile.

I have been in the north of Sweden. Most intriguing place that I know.