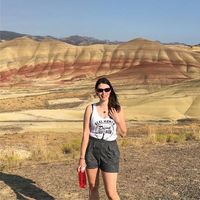 I have the most boring job in the world (I help write grant proposals for a university) so in my spare time, I travel and do standup comedy. I'm relatively good at both.

I'm all about respect in pretty much every aspect of life-- it's easy to say and a lot harder to actually do it.

I'm just fascinated by people--for me that's half the allure of traveling. I've found that whereas some people judge cities by food and prices, I tend to judge a city by the people, and there are some cities I would have written off entirely had I not met some awesome people on Couchsurfing who made me see everything in a new light.

I travel so that I can meet friendly, open-minded, and interesting people, and if that isn't what Couchsurfing is about then I've been doing this wrong for years.

All Batman everything. I'm also pretty obsessed with public radio and the oh-so sassy BBC News radio (you've gotta entertain yourself somehow when you have a boring job)

Books by Kurt Vonnegut or James Baldwin depending on my mood.

I haven't really done anything amazing like raised a child or climbed a mountain, but I managed a staff of 300+ workers at a dining hall for over a year and somehow didn't go insane.

I am happy to show surfers around Ann Arbor, I've lived here almost my whole life and as mentioned, I'm good at retaining and reguritating trivia. I can teach you how the locals live--mostly by eating and drinking and complaining about the cold. I'm also happy to help you navigate the bus system and find bars/restaurants that don't suck.

Wow, when I first made this profile, I felt like I didn't possibly have anything to teach, but now I do! I can actually cook! And I don't know, I can give life advice. I can look at dying plants and tell you what's wrong with them.

Happy to share food! Couchsurfing for me is more about the social aspect than the cost-saving aspect at this point (this boring job is good for something) so I can actually afford to buy good food when I travel and share good food with travelers who visit me.