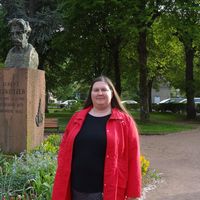 I live in Breisach am Rhein, directly at the French-German border. The next bigger cities are Freiburg (Germany) and Colmar (France). Originally, I come from Frankfurt.

After I took my university-entrance diploma, I studied social and political sciences at Frankfurt's university.
During the last years, I had an administrative job in a welfare centre and I worked in a repertory cinema.
Several years ago, I also had a job doing online marketing for a company in Frankfurt.

At the moment, I am working at the office of an advice centre for people who are addicted to drugs. My second job is working as an assistant for disabled women.

My favourite artists are Nicky de Saint Phalle, Friedensreich Hundertwasser, Pablo Picasso and Elvira Bach. Myself, I like to paint with pastels. And I love museums (about art / history).

My favourite films:
For example Woman in gold (with Hellen Mirren), Persepolis (by Marjane Satrapi), Secrets of a life, Hidden figures, the RBG documentary, Wonder, Captain fantastic, As long as I breath, The Butler, West Side Story, Shall we dance, the documentary about the writer Thomas Mann and his family (by Mr Breoler), Harry Potter.

My favourite books:
Persepolis (by Marjane Satrapi), the diary of Anne Frank, the Blue Journey by Iris Alanyali, Siddartha by Hermann Hesse, Brave New World. At the moment, I am reading a German book about laughter yoga.

My favourite music:
I like musicals (like Dance of the Vampires, West Side story), film music, Helen Fischer, Kelly family, a bit of classical music (for example Mozart's magic flute), Oonagh, spiritual music.

I uploaded some of my paintings here (you can watch them at "photos").