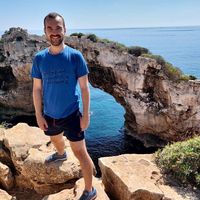 No grand mission, taking it one step at a time

Hi,
I love science (I graduated Computer Science), playing guitar, hanging out with my friends, playing sports (football, basketball, table tennis). I am easy going, adventurous and like to meet new people, hence my registration on this website:). I can confidently say that I am open-minded and am extremely curious to learn about different people and cultures.

I originally created this account in order to surf in Finland but have hosted a few people in Bulgaria since and surfed once more. I'd host &amp; surf again:)

Movies - I don't have a sophisticated taste, watch whatever lighthearted Hollywood comedy just for entertainment:)
Books - I don't read much; I like fantasy, mostly Terry Pratchet
Music - Could listen to pop music for fun/dancing but I get easily bored with it. I Used to be a metal head in my teen years(heavy metal, thrash, death, gothic, etc.). I play mainly classical music, including my own things but I don't typically listen to classical music except selected guitar performances. I could enjoy literally any style on a song-to-song basis. I like blues music, psychedelic rock, punk, ska-punk, hardcore, funk, jazz, electronic music, old-school rap, etc.