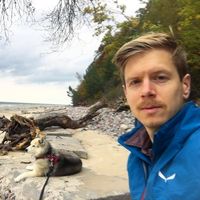 I live in Salzburg and Berlin and work as a singer, mostly in opera and classical concert music. This takes me across Europe, and occasionally back to the US, where I am from.

I tend to be on the quiet side, and I value deep conversation and meaningful exchange of ideas and passions. I love to learn new skills, and share my own with hosts.

If I have a free day in a city that is new to me, I like to wander, follow my nose for interesting spots and get off the beaten track. This might lead me to galleries, bookshops, or parks. I usually carry a book and journal, or music I'm working on, with me and my day to day travel is a mixture of attending to my work and taking in the places I go.

I love spending time outdoors, hiking and exploring wild(er) spaces. I try to tread lightly, as that desire to be in places less influenced by humans holds an inherent contradiction, as it brings me there.

Environmental causes used to be central to my life, and though they are no longer my work, it is still close to my heart and way of living. Whether it is thinking about sustainable energy systems, or a post-electricity world, or getting my hands dirty in the garden, environmental themes and actions are a part of me, and at times find their way into my work as a singer and artist.

Feel free to check out some of my work on my professional website is: www.andrewrobertmunn.com

I often travel with my dog, Shadowfax, a (as of 2019) ten year old husky mix. He has plenty of references from past roommates and hosts. If I don't mention him in my initial message to you, I do not plan to travel with him.

I joined couch surfing in 2008 when I was in the thick of my environmental movement work. Through that network of friends and comrades, and later through my extended community of musician friends, I've done a TON of couchsurfing, though not on this platform. I'm updating my profile for the first time in a decade because I am traveling quite a bit in Europe for auditions, performances, and the occasional wanderlust itch. I am ashamed to say I've used AirBNB a lot the last years and in addition to the ravages on the rental market, I find that it cheapens and commodifies the experience of hosting and visiting - I am looking to meet people and have meaningful exchanges of ideas, energy, and time on my travels, and perhaps on yours if you are coming through Berlin.

Organized mass demonstrations and civil disobedience against mountaintop removal coal mining.
Sung at Carnegie Hall
Audition at the Metropolitan Opera (they said not yet)

LEARN
- Whatever you've got to teach I am probably curious, especially cooking tips

I would love to cook for you. I make pretty excellent black beans, among other things.
Point-blank opera singing