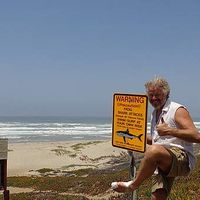 Get on with it.

Very open and free form. I have been called many things by friends, family &amp; co-workers: free-spirited, left of center, "cleans up real good", anything but normal, conservative, liberal etc... I'll let you decide for yourself which ones apply. I am widowered (8 years), and have learned how to live peacefully with myself.
When I graduated high school, I spent the next 2 years hitch-hiking around the country, putting approximately 20,000 miles on my thumb. I'd like to do another trip soon. Like from WA to AZ and back. CS along the way.
Currently am in the process of ridding my life of clutter and unnecessary 'crap'. Retired from the Fire Department in May 2011 and plan to REALLY start traveling more! I have been in Russia, Germany, Mexico, Canada, Switzerland, France, Austria, Liechtenstein, Spain, Scotland, Ireland, England, Wales, Sweden, Denmark, Iceland, Netherlands.
I have already or am in the process of learning new languages - or at least have a familiarity with Spanish, French, German, Russian, Hmong.

Later, no time today ( Actually, I AM busy, that is not my philosophy...or is it?)

Helped put together the Point CSrs group, have regular meetings for locals to get together and share experiences as well as promote CS to the community. I am very happy to show people around my world, which includes most of Washington. I travel the U.S. widely, having been in all 50 states at least twice within 2 years. I am often available to travel with and show people around as a guide.
Went to Utqiakvik Alaska so I could swim in the Arctic Ocean on my 62nd birthday...in my birthday suit.

EXPLORING! camping, swimming, scuba ( no longer...ear problems), hiking, naturism, experiment with cooking different foods with fresh herbs and spices!, meeting people, variety of music - I like to listen to live concerts then buy a CD of the artist as a show of support. Sky dived a few times.
I found my new happy place at Lake Bronson, I spend my free time here doing caretaker stuff. Life is good.

BOOKS- Currently reading a Bio of an Inuit man - bought the book when visiting Utqiakvik (Barrow) Alaska.
Alaska, by Michener, Starting to read all those I should have read in school. Gulliver's Travels, Jonathon Livingston Seagull, Ulysses,etc... Also, trying to expand my reading horizons by finding interesting books about places around the world and interesting people as varied as James Madison, Denzel Washington, Mel Laird, ...
Just finished (2013) 2 on Lighthouses, one an account of a guy in Scotland who worked a summer during college in the early 70's, the other a fictional work set in Australia during the 1920's. Finished 'On The Road' by Kerouac. I found it boring as I already lived at least the first part of the book when I was 17-19. Besides, I find the writing and accounting of their travels to be tedious. Not worth the time I spent reading. Tried to get into 'Catcher in the Rye'. Put it down after 2 chapters, seems to be more of the same. I found the use of vulgarity to be pointless, and while I am no prude, there seemed to be no point to it other than to try and sound cool and hip. Sorry. Don't quite cut it. Got a ton of good winter reading materials including Vol.4 of The Fabulous Furry Freak Brothers'. Frank Peretti, Randy Alcorn, James Michener, Edward Rutherfords' 'The Dublin Saga' series in preparation for a trip to the Emerald Isle in 2011.

MUSIC - just about anything of what I like to call 'quality thought out'. Most styles but especially pre-disco rock (my high school years). As long as I mentioned it, I DO NOT like disco or pop /top 40. I prefer the kind of music you only hear in concert or on an alternative station. I hate that some music execs somewhere decide what gets air time and what doesn't. I do like Bluegrass or hillbilly. Light jazz - not the 'honk &amp; squeak' jazz. Blues - both modern and classic, hillbilly rock (CCR, Marshall Tucker, Ozark MT. Daredevils, Nitty Gritty Dirt Band, etc).
MOVIES- Elizabethtown - because I can relate, I always cry at the end -Life is good!
Up- Same reason
Idiocrasy - I want to see what the world will be like in 500 years.
Team America- who doesn't love good satire? Into The Wild - it brings back memories of my hitchhiking days. I especially like that he reconciled with his father - at least in his mind, before the end of the movie.
BigBangTheory: I can't relate, but it is hilarious.

Delivered a baby... and held a young child in my arms as she died... within a few days of each other on my job as a Paramedic. A most joyful experience followed by the saddest experience one can endure.
Another interesting death experience. In March 2016, on a trip up the California coast, I held a dying sea duck in my hands and we made eye contact as he died. I'll never forget the look in his eyes.

I let my Paramedic license lapse since retiring in 2011. But I maintain current training in the field and my ACLS cert is current.,
Helping people stay safe, happy &amp; healthy.

I can cook free-form. Usually comes out pretty good. I always eat it anyway.
Self-Cleaning.