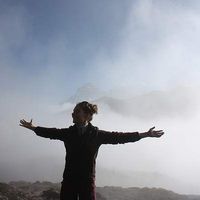 we are a family of three and a half now (Viera+Peter+daugher Linda who is almost 2yrs old) and expecting our second baby this summer.

We didn't really host during the past 2 years because of my first pregnancy and the pandemic. Now we would like to slowly restart our CS carrer but would like to take it slowly :) Anyway, drop me a message if you are considering visiting our region and we will see what we can offer :)

I am still a big fan of CS or rather of the initial idea but I am slowly moving into newer and non-profit hospitality networks, so you will definitely impress me more if you contact me via these websites: https://www.trustroots.org/profile/wjerocka or https://www.bewelcome.org/members/wjerocka

you can check some traveling stories from our trips here: (articles in Slovak and English: http://ourway.sk/
and my Slovak blog is here: http://valentova.blog.sme.sk/

Honestly, I am an alien! But I am not at all dangerous, most of the time I am friendly, nice, hospitable and other bullshits :-D

☼ ☼ ☼ CouchSurfing community used to be great! I had the chance to go to some regular or irregular CS events in Istanbul, New York City, Kuala Lumpur, Quito and Bratislava and it was all amazing☼ ☼ ☼

☼ ☼ ☼ I love many things such as traveling, art, architecture, literature, sport - mostly outdoor, music, good food-green pepper or paprika, whatever language you prefer is the best vegetable in the world ! and then eggplant and fish, avocado and all vegetarian meals ! I enjoy going to the concerts, hitchhiking, hiking and all crazy and extraordinary things

***Movies: when I was at high school my favourite movie was Trainspotting, Pulp Fiction and Kill Bill. I still like this kind of movies but I am interested in old films too, some movies with Charlie Chaplin ( The Dictator, Modern Times ). La dolce vita, Doctor Zhivago, Sophies´s choice. And of course I like to watch some slovak and czech films ( unfortunately, there is not too much, I hope that the situation is getting better :)and nowadays I really prefer some politically engaged movies and documents

*** Music: I looove electronic and world music and concerts and music festivals in general. Went to Pohoda festival (biggest music event in Slovakia) twice as a volunter-it was amazing! Right after I went to Sziget festival in Budapest (considered to be the greatest festival in central Europe and it was unbelievable! later in 2018 I was in EXIT festival in Novi Sad (Serbia). I went to Coldplay concert in Los Angeles back in 2011. One of the best music event ever! I looove Slovak and Czech music bands. I used to listen Nirvana and Metallica during high school years and now I turned more into electronic. However I also like oldies and world music.

*** Books: I really love reading books ! Since my childhood I consider myself as a bookworm.

☼ ☼ ☼ traveling across India by night trains and lost my suitcase

☼ ☼ ☼ one month of pure backpacking in the Philippines

☼ ☼ ☼ 2 months volunteering in a backpacker hostel in Kuala Lumpur, Malaysia and then 3 weeks of pure backpacking through the region

☼ ☼ ☼ 10 days of Winter Outdoor Activity Training in pure Latvian wilderness ! Sleeping outside in a tent and igloo, Crazy cross-country skiing, snowboarding, getting lost and much more :-D

☼ ☼ ☼ Volunteering in Israel and Jordan during the summer 2012 full of adventures, sleeping under the stars in Petra and Wadi Rum in Jordan, snorchelling in Red Sea in Israel and much more

☼ ☼ ☼ 2-weeks long hitchhiking and CS Turkey/Cyprus trip with two other friends. We started in Istanbul and ended in Cyprus. On the road, we met loads of crazy people and had an amazing time ! And we survived three earthquakes in Turkey !

☼ ☼ ☼ During my university exchange programme in Istanbul 2012, I survived 4 months at the very religious dormitory with really strict rules and curfew at 8:30pm !

☼ ☼ ☼ Solotrip to Mexico City in September 2011 and the whole summer in Los Angeles :-)

☼ ☼ ☼ Summer 2010 when I lived and worked in Brooklyn was really excellent, so many interesting encounters happened there and I fell in love with New York City !

☼ ☼ ☼ I was a solo-hitchhiker and I visited some nice places in Vermont, Montreal, Boston, NYC and Cape Cod during the summer 2009 when I was 21 and it was awesome !!

☼ ☼ ☼ Hitchhiking through Western Europe in summer 2007. It was really great experience. We met many kind people. I would like to repeat it !

I can share some recommendations on how to hitchhike in all different situations ( for now, I hitchhiked in about 25 countries). How to do extra low budget trips, how to sleep at the airports and other usefull things :-D and I learned how to build an igloo, so we can make one :-D