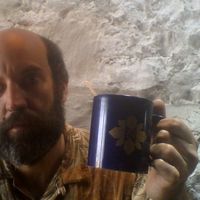 I am a wandering poet, currently residing in Austin. I recently set up a business here, and I'm rushing my first book to publication. I've been writing the final draft of it on the corner of 6th and Trinity, where I also write poetically prose paragraphs for tips. The book is a translation of an Old English poem, roughly contemporary with Beowulf, set in a mythological world that mashes up Old Norse and Christian culture. My sculpture, “The Stolen Shoreline”, a phoenix-obelisk, was unveiled at Windy Point Park on Lake Travis on the Summer Solstice. Most of my time in Austin has been spent there where I’ve been working on creating a sculpture garden where other artists are welcome to contribute. I’m also very happy to take other sculptures to the park and show you how you can contribute. My art has been described as primitive, tribal, “frightfully masculine”, weird, weird, and wyrd; I take influence from Native American and Old Norse culture primary, in part because I have traced my own ancestry back to the Lenni-Lenape and the Frisians.

Recently, a friend of mine who is a cartographer and survivalist and I have teamed up, with the intention of publishing books and maps. We will be going on a series of adventures around the Austin area to practice survival skills and promote our businesses. If you would like to join us on one of these adventures, shoot me a message and I’ll let you know the next plan.

I seek hosts occasionally because it’s nice to crash in a “normal” place every once in a while. If I’m asking, I just need a place to chill for a bit. I’m perfectly fine with shared spaces and I try to be respectful to my guest. I’ve been told I’m a very intense person, so I’m not everyone’s cup of tea.

My favorite way to be useful when visiting others is cooking. I like to make whimsical dishes with things that are lying around in the fridge or freezer, sometimes with a few supplementary ingredients from the grocery story or nature. Some meals go horribly, but I like to eat my mistakes; most are delightful.

Presently, I am hoping to find a place where I can spend about 8 hours working indoors and then crash on a couch, floor, or bed. The final work left before my book will be published involves scanning in art. I have a printer/scanner (which you are welcome to use if I visit, should you have a need). Ideal would be a space where I can just be out of your way, and if you let me cook also, I’m happy to share whatever I make with you once I’m done working.

Though I have been a poet my whole life (only a sculptor since February of this year), I’ve often held more standard employment, which I’ll tell you about to forestall skepticism. I taught college English for 13 years at a variety of colleges, where I often earned teaching awards. I particularly enjoyed literature classes, but I also taught introductory writing and even math classes. I worked for a while as a technical writer for several Microsoft in Redmond, WA, and I worked for several newspapers in New Jersey, New Hampshire, and Milwaukee as a reporter.

I’m looking forward to meeting you, sharing experiences and having adventures!

I like learning new languages, by which I mean not standardized languages but different dialects. I enjoy the little differences in the way different human beings speak, using language to articulate thought.

I enjoy karaoke. I like to sing Pantera, Kid Cudi, Amy Winehouse, the Highwaymen, and old story songs like Pancho &amp; Lefty.

Chess: I drew Anatoly Karpov in Mansasquan, NJ, circa 1994. Speed chess. I tricked him. I enjoy chess variants. I once passed out in Bobby Fischer's chair in at a used book store in Reykjavík. I finished second in the armed forces chess tournament in the late 90s, losing to an old enlisted Army guy who played the Cairo Khan against my aggressive opening and broke through my queen's side with a brilliant counter-attack. I have an open invitation to play Gary Kasparov, to which he has not replied.

I would like to share this: While my profile is "not verified", I am more than happy to verify my identity driver's license, passport, library card, finger print, or other means if you are skeptical. As I very much support what this website is attempting to accomplish, I hope to support it once my work starts selling.

Cooking, cleaning, wood-working. I have made wood burnings for several of my hosts and I will gladly make you one.

I also enjoy picking up litter. I often pick up cigarette buts habitually, and I would gladly clear any area you have that has become overwrought with rubbish.

My Subaru, which is old and not as tricked out as it ought to be, is adequate for going on treks and the like.