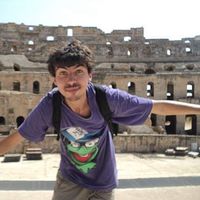 For now travel across Algeria.

well well, I'm not skillful when it comes to describe myself, but okey. I won't praise myself here by stating some personal qualities, it would be better to let the others talk about that, but what is sure is that I can have a decent conversation in six languages which in order of proficiency are: Arabic, French, English, Japanese, Italian and Turkish, and I have also a basic level in Chinese and Farsi, I love those language and I hope I can get better on them :)
I am also a chess lover, I love this game and every game is a great pleasure for me.
I am a rpg gamer, even though recently I don't play a lot, but the gamer spirit is still there!
by the way it's useless to say that I love traveling, being a part of couchsurfing community implies that you are a traveler, or maybe not who knows?
For the rest, you can meet me face to face!

take your bag and go for the adventure

Video games, board games, chess, games in general and I play for winning, I mean I have fun only when I win xD
I like manga too, mainly NARUTO!
I don't know how this happen but I am so interested in learning languages, the more I learn them the more I want to know more about the and learn others!
I love wikipedia too, it happen to me to spend hours there and never get bored xD
I like many other stuff but I don't like others too but those are the first who came to my mind!

Movies: excepting Naruto (I know it's not a movie) that I love since long, I almost never watch movies, it makes me sleep.
Music: I almost listen to everything, I have not a specially preferred style or preferred singer.
Books: I like manga, but when I read something it's probably a wikipedia article, non fiction or language books or a dictionary!

I travelled quite a lot in chaotic ways. A lot of strange things happened to me.

I would like to improve my skills in the languages I don't master yet like Japanese Italian Turkish Persian Chinese Spanish and Portuguese, but also learn any new language, the more the languages I learn the more I want to learn others, in other hand I would be proud to teach you my mother tongue Arabic, and also the language I know including Japanese and Italian even though I don't master them so well, but the others I don't think I have the level to teach them but who knows I can give it a shot, and just to make it clear, in Morocco french is not our language! I still meet some people who think that french is our first language and I find that quit insulting for our culture and language! and let me be sincere for one sec, I wouldn't be happy to teach you french, I would speak french or english with you only if we can have a descent conversation in them, if you want to use me as a tool to practice those languages I won't help you, understood? but you can practice arabic with me even if you are a beginner :)
And of course, as a chess player, as I'm not at the level to beat Carlsen, so I have still to learn and improve my chess skills, but if you are a beginner I can teach you some stuff about chess, and if you are an average player like me, we can have an intense game together!