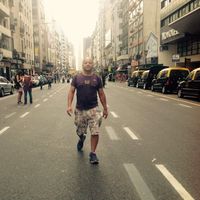 All of this started to happen in 1807 when we were in a trapped city, the british navy were ready to escort us to an overseas colony and the Napoleon´s army just in the gates to assault Lisbon. We left our place like another ones in a rush with the few belongings that we could grab and changing some favors we got a place to leave in a fleet of old ships where we spent the next 4 months having seasickness, nasty accommodations, diseases and bad weather sometimes. Fortunately we were alive and the officers found a place for us to stay when we arrived in the city of San Sebastian of Rio de Janeiro which became the kingdom´s new capital. Everything was new to us... the language, people, habits and from Portuguese I became Carioca, a term used by the indigenous meaning "house of the white people". Well, this is my iberian background and cannot forget that I have an italian zest from mother's side. Two hundred years later I can say... thanks to all the threatening and scars we survived and fell in love with the new land. I always had a story behind me and a knack to be more than a spot. I dare to be the first to do something nobody tried to. I can talk from nuclear physics, thermodynamics to kid´s stuff. I really feel that life is just beginning to me, I am a morning person who loves to take a highway seeing the sunrise, the city lights dimming and to sip a strong coffee with good company. I sleep just few hours and if I set up a time to do something... it has to be like I said.

Japanese food is a test to know if I like you or not. Follow me up...The ones I like I teach how to proceed with sticks and so on, the ones I don't I let it go and eat mine. Care about wasabi! Action instead of too much talking. I'd like to be slower, less anxious and let things run. I am pragmatist, cartesian.

I spent some years greeting noobs here, I have sent half million messages while we had a New Member Welcome Group.

Once I was supposed to have a friend from Morocco and another one from Belgium coming from different places at same time. Only getting home that I realized I had for those days Abdel and the other one was still in his last login place miles away. One week later we were strolling in Rio downtown having juices in a bar and guess who we met lost there, the belgian dude! Among 4 million people to find someone who you just have a slight idea how looks like is amazing and shows how world is small and couchsurfing works. I was in a party in Buenos Aires City and a pretty girl recognized me by name because once I sent her a CS greeting. Helping a newbie from Argentine to get a couch in Amsterdam for Queen´s Birthday. I greeted one guy from the countryside in Germany and when he replied he was being hosted by my future host there in Berlin.

Hearing Morissey/The Smiths give me the feeling that I am about to cry, what´s good for me. Usually I do not go to the movies (why the previews are so superior?) and watch them on cable one year later. Comedies... never with people who laughs all the time, on the radio I listen to the news and never know who is playing but I have my own collection. I read alot when I was younger, today I like the ones you do not need the previous chapter to understand, love pop magazines with sci curiosities. Love Bossa Nova and appreciate any kind of good music, I am really open to experience and whenever needed I take the french leave. Another day I transferred songs to my Ipod and suddenly I loved a Kazakhi song "по

I did Comrades (down) run in 2014, not bad for a 50. 2012 ran 4 Half marathons in 2 weeks (NYC, Lisbon, Prague and Berlin) and my best time ever 1h47min in Czech Rep. Goofy Challenge in Jan 2013. Hearing "Let me take to Rio" when I was landing in Rio after 2 days in NYC for buying pijama pants. Another day I realized that I live in a big country and half of its area is a tropical jungle. In less than one year I was in the news, I did something odd in a nuclear plant (really!!). To go to Israel to know what happened to a person I met in a trip 10 years earlier. Unfortunately he died in an avalanche in Argentina and I needed to meet his family and tell them about a son left in Denmark. To build a house before getting retired. Moving the rocks in a beach and changed completely the look of it.
Spending my 46th birthday in Rome was really outstanding... making friends, having dinner with cool people, seeing friends from 2 years ago and again across the ocean.
Running in different cities lately, Paris, Rome, Berlin, Orlando... Jerusalem. Spending 2 weeks with the same pants because of traveling light in cheap airlines. No shopping in the Marrakech medina because I hate bargaining things. Spending a day with 3 euros in the pocket of a shorts after a run and no keys until the evening. Buying a Ferrari helmet in the official store and now I need a scooter. Getting 600 euros due to overbooking from Lufthansa and turning it into an Ipad. I love my life!

I don't know too much but I suspect about many things. I can share my taste on food, music and my time. I can show you a sunrise everyday in the sea among islands and ships, if you don't mind to wake up early. But I learned much more from the people I met, silently they taught me heaps of things that I took in without their perception.