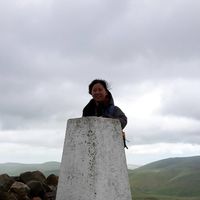 On a working holiday in the UK starting June 2022. Double vaxxed, and not a party person. Gender non-conforming, person living with mental illness, and currently going by the name Cheviot. I’ve also been told I’m kind, intelligent, and funny

Honesty, open communication, kindness, and authenticity. Oh and of course CORRELATION DOES NOT IMPLY CAUSATION

Movies &amp; Shows: open to explore anything with a bit of depth and wisdom in it. Definitely more interested in independent films than Hollywood stuff

Books: Most things involving trauma and recovery, or social movements against oppressors. Hoping to dabble more into Indigenous literature

Fairy Creek Blockade. Building a community with the amazing land defenders and de-escalating conflict with law enforcement. Also locked myself in a sleeping dragon and (almost) got arrested. Did I mention I played the bagpipes on the frontlines?

Food and recipes. Some dark humour and lessons from recovery if you’re into that sort of stuff. And if I feel safe enough, a wise, grounded presence