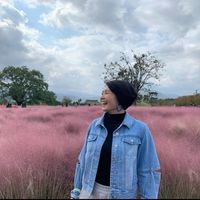 Stay in a All Girls-dorm, so i can only host ONE-GIRL at each time :) Only host on week days as I am usually away over weekend (Sorry guys please do not send me request i will have to decline, due to room condition) 由於宿舍條件有限很抱歉恕不接待男生留宿，不好意思！

Please when sending a request, write the estimated time u will arrive and departure from Macau . Prefer last minute-request not too much advanced! 發送請求時務必備註預計的到達時間，謝謝！

If you cannot find any host, i recommend "Pensao Lotus” hostel, really the cheapest among all hostels in Macau.... also pls don’t ask me plan your itinerary I think u should be more mature to research yourself... 若您無法找到任何沙發主，建議搜索"Pensao Lotus” 青旅，這也許是澳門最便宜的

2002-went to Singapore by myself at 15
2014-Resigned from work in Singapore and volunteered in south of England
2015-Back to Beijing on Trans-Mongolia
2016- Quitted job from kindergarden and made my way to the Netherlands as aupair and wander around
2017-Back in china to work as a freelance translator
Mid 2017 -2018 working in Palau with lots of Sun, ocean and jellyfish
2019- just moved to Macau...

I don't have a drinking problem, I drink, I get drunk, i fall down, no problem.

I have heard about this when I was backpacking in Cambodia, where I did my first half-marathon.There were 4 guys in my room and they were talking about how good this is as you get to meet with people from diverse cultures.

Education and the significance of life.

Top of the list- must be bringing my mum to couchsurfing in HK!

Starting with the recent one, took the trans-mongolian train back to Beijing from Moscow, and met so many amazing friends on train, use the small basin to shower, getting beers, and almost miss the train!

Swimming in the Jellyfish Lake in Palau with golden orange jellyfishes!! Yeah Jellysifh, and they don't sting!!!

Climbing up the mountain to see the Tiger Nest Temple in Bhutan, a kingdom in the Himalayas, and met an old lady carrying her landuary basket I offered my help to carry for her, and she held my hand and said lots of things in the local language I did not understand, my tour guide after said that she knew me before I was in her dream or something like this, it was just amazing!

Hitch hiking with a fellow volunteer in England to the Stonegenge and celebrated the winter solstice with druids and pagons. it was hell lots fun. We had no place to sleep and outside was 1 degree celcius, a nice kind Carribean soldier took us in to his car and offered his beer to us. What an adventure

Hitch Hiking with 2 lovely hosts in Galway, Ireland to Cong village of Mayo County and watching the Solar eclipe right in front of their house, there is a beach at Salthill, with people playing drum and music, we observed the darkness of the sun.

When I visited my friend in Vancouver last year, she recommended me to catch a Northern light in Yellowknife. So I was there with my friend we caught a glimpse of the Aurora for 5 minutes in the snowily night which I will never forget in my entire life!

I went to the Ang Kor Wat end of 2012 to take part in the Half Marathon and it was my first time running a marathon. It was just amazing time to run across all the temples and having village kids cheering for you along the way to the finishing point. I can never forget that experience.

I joined a volunteer program in the phillippines when I was in the university. We spend 10 days in the countryside of Barcolode city to furnish and paint a library for the middle school students.

After graduation from Singapore, I have also went to volunteer in a primary school in the countryside of Chongqing city, China, there I realize the students everyday are walking 3 hours in total to go to class, as one day, i walked with them back home, with another volunteer, I visited the places they live, most of them lived with grandparents as their own parents are working in the city to earn money. At that point, I begin to respect these young children's independence and determination to study hard, as they were told that if they study hard, they will be able to find a good job and go to the city. I begin to realize how lucky we guys are, living with no trouble, have a stable life, have a little bit of extra money to travel around and eat a good meal. That is also why, I have decided to take up this one year, to be a volunteer in Bramdean of Hampshire County, South England

If you like to listen to stories, i have a lot to tell. About living in China and Singapore, about living in UK in this krishnamurti school with organic farm.I can teach you conversational phrases thats useful in Mandarin and Cantonese, enough to get a drink in China/ Hong kong :D