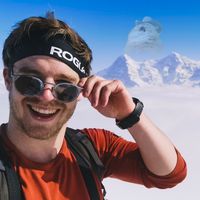 I'm french guy (hey, nobody's perfect), I grow up in a small village "close" to Strasbourg, studied physiotherapy in Dresden, Germany and lived there for almost 5 years. Now I'm working where the winds brings me. I ended up in the swiss mountains.

I can't cook ("what a shame, it's supposed to be in your DNA!"). But if you're staying at my place, I promise you bacon&amp;eggs (or maybe some crêpes if you're lucky, but also if I'm not too lazy)

Life's too short to learn german

I met Ines, a funny argentinian girl lost in Germany. Apparently girls can get second degree humour now. It freaked me out.

I read mostly physio stuff. Wow, much originla, so poet.

I ran for my life (and also for my bank account) at 3am in Istanbul, slightly drunk.

I participated to Pyongyang's marathon