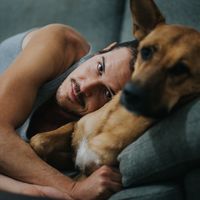 Meet Yariv...
Yariv lives in Tel Aviv District along with his two dogs: Piglet and Sweetness.
Seriously! 2 Dogs! You are probably thinking: "Damn! another vegan, animal lover, tree hugger..."
And you would be right!

When Yariv is not working, he likes to take his dogs and go hiking in the desert, do some sport, and also some extreme sports like Snowboarding or down hill mountain bike.

Yariv seems to be quite the nerd.
His Nerdy hobbies include: Watch tons of documentaries, his house is filled with star wars geeky figures and pictrues.
On the other hand Yariv can drink alcohol like a camel, and claims he can beat any tourist in any drinking game of their choice (Seems a bit like an alcoholic nerd to me)

Tel Aviv Savidor center is a big bus and train station in Tel Aviv.
From here reaching places like: Airport, Jerusalem, Haifa is a direct short train ride, and going to the center of Tel Aviv is a short walk or shorter bus ride

The house is pretty big and there is an empty private guest room to crash in.

Well I think enough is said, and now it's time to meet those three rascals: Yariv, Piglet and Sweetness...

few things...
Got chased by a huge wild boar, almost "bought the farm" there
almost drowned while surfing in Mexico, had "one leg in the grave" in that experience.
almost fell of a cliff while mountain biking in Romania, was close to "meeting my maker"
served as a combat soldier during war time, almost "kicked the bucket" a few times while doing that.
someone put a knife against my throat while traveling, almost went "belly up".
Kind of make you appreciate life a bit more I guess.