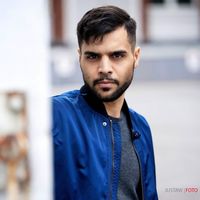 I love to travel, party, dance, experience new cultures and enjoy the life. If you want to know more about me, ask me. 😉
📷 Instagram: @yasin_islek

🌎 I want experiences and see new countries and cities like: I would live there. I want to see new places, visit new people, get involed in local stuff and get insider tips about "must be's / see's / do's". I want to get in touch with the real life of a country not that touristic stuff! 🤠

🕴🏻Berlin: Red Carpet with Ben Stiller, Penélope Cruz, Owen Wilson, Will Ferrel, Justin Theroux, and many more at the Zoolander No. 2 Premiere.

Düsseldorf: At the Set with Adam Driver and Simon Helberg.

Sightseeing in Cologne and Düsseldorf.
I live between this big Cities. We can do or visit:
- Dome in Cologne
- Boulevard of "Riches" in Düsseldorf
- Partys (Black, Latin, Asian, Oriental Music)
- Relaxed Forest Walk in the nature (Summer Time)
- Good Food Places for small budget
- etc.