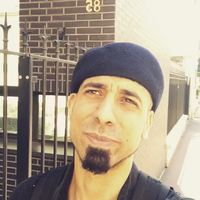 Bonjour My name is yass,
I was one of the first to use Couchsurfing, I even had the chance to meet the founder for a party in Boston,
Now, I am not super active here since I have my restaurant (a social life killer), but I do love to meet people for walks, coffee. Especially to show them an unknown side of pairs.
I believe there is much more to see than what the guide and blog offer us.
For example, there are a few cities (10 min by metro) that can give you the real french experience. with a tiny warm city center, good restaurant.

I have been to many countries, maybe 25 if I remember. When I look to my past, all greatest experience was with local,
I might sound stupid but it feels so good to go to the grocery store with local, it almost feels like an adventure,
traveling alone is good but meeting people during your trip is even better

I strongly believe in attraction law, if you do good things around you, so you'll attract good things,

I would love to cook together! cause cooking brings so much good vibe.
I also wish to motivate my host to follow me on my workout morning routine (I gain 5kg muscle and I hope I could motivate my host to keep this routine on its own!
maybe drawing also would be so fun