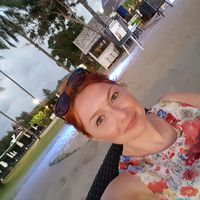 Hi there! I'm 30, living now in Warsaw, Poland. How would I describe myself? A music freak, trying hard to avoid moaners and spoilsports. Positive, rather enthusiastic about life, observant, curious and always willing to discover more. Ready for adventures and challenges, new tastes (loooove food), new people, new kinds of music.

I used to write concert reviews, since writing (about everything and nothing) is one of my hobbies. Now I do it rather rarely since I find meeting my friends and doing crazy (or boring) things with them far more interesting.

I do like partying with good company. Kinds of parties? Expect the unexpected. 80s music, dress-up parties, modern music, beach parties, film music galas, drums, anything. One evening it may be the Swiss police brass band performing by the Zurich lake (been there, done that, got the T-shirt as they say), the other night - Adele, and then Rammstein. I take them all (but separately).

Sometimes I consider myself a sociopath, especially when it comes to people blocking the bus entrance. But generally speaking, I am a people person and I feel comfortable when talking to folks I've just met. Importantly, I respect other people's privacy and I'm not too intrusive. And I don't like it when people are too intrusive towards me.

I enjoy dancing and having fun with friends, be it a party, a casual meeting, a barbecue or a little chat over a cup of coffee. I'm a coffee lover and a fan of [tasty!] food. I'm ready to try new cuisines and I like to keep my kitchen clean. Yours too.

Visiting new places and meeting people of different cultures broadens my horizons (a cliché-ridden style, but still!), and comparing cultural differences is simply amazing. Also, I'm trying to focus on learning languages now since I'd like to communicate in a foreign language other than English. Meeting you might make this happen:)

Enjoy your life and make the most of it!

Started in 2013. Travelled alone to Chicago and met a bunch of wonderful people there, both my hosts and citizens in the streets. Spent 5 wonderful days in the windy city. Now trying to discover Europe more. So far, the CS experience has been amazing. Hope to continue and expand the horizons further!

I could spend hours listening about people's customs in their home country. I love music freaks who, like me, feel the adrenaline seconds before the music gig starts. I think I'm quite creative when it comes to writing, but still find no time to focus more on this skill. I like reading about advertising mechanisms and social media. Finally, I get excited when it comes to planning trips - that's why I'm here:)

Films:
never remember the titles... but for sure "Relatos Salvajes", "Leon", "Tato", "A Perfect World", "Jugten" and "Toni Erdmann"

I've had some minor achievements which I'm particually proud of, but hopefully the greatest ones (including travel destinations) are still to come!

I'm always open to any kind of experience, be it learning how to play the guitar, trying to speak your language, cooking together, doing extreme sports or playing chess ;)