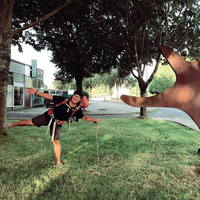 I am currently working as a song writer. I love travelling and meeting new people.

I try to go around the world with low or no budget if possible. Not because I don't have any money nor I don't want to spend money, it's because I just want to prove myself that it is possible.

There was an event called Can You Make It? Held by Red Bull. It was held in Europe and the contenders were meant to travel from one of Budapest, Madrid, Rome, Manchester and Stockhlm to Amsterdam without money and phone.
I applied for the event as a Korean team but I was not chosen. But I decided to do it anyways and just went to Europe all by myself on the exactly same date when the official contenders start their journey.
As soon as I started travelling, I sealed my phone and my money and made my way to Amsterdam. With the helps from random people that I met on thr way, I made it to Amsterdam!
There, Red Bull heard about me doing that all by myself, they invited me to their official after party!

I can teach Korean language, guitar and.. solving Rubik's cube maybe..?
I love learning other culture. Language or food, anything.