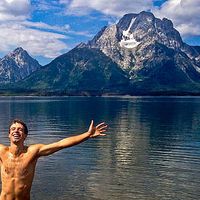 Headed to the Oregon Coast for a seafood thanksgiving with old friends!

I live to work and play outside. Whether it's rafting, biking, climbing, hiking, surfing, running, jumping off of high things into water, I feel most at home when I am outside. Since graduating Carleton College with a degree in Geology, I have been a genuine cowboy in Montana, a wilderness educator in the Boundary Waters Canoe Area, North Cascades National Park, a professional ski bum in Jackson Wyoming, and most recently, a raft guide on the Snake River in Teton National Park. I am always looking for new things to learn and new adventures to go on. Traveling and meeting new people keeps my brain humming and inspires me to follow my passions.

Living in the moment. Not getting to comfortable in any routine. To be open and honest with myself and others.

I've surfed couches up and down the united states and had some fantastic experiences (like being dragged to the St. Louis City Museum in the middle of the night) and some unusual ones (running away from a cult).

Just started my own account... so give me a chance.

I was recently caught in an unexpected AM thunderstorm in the Grand Tetons. Camping on the shores of Jackson Lake, I shaken awake by an explosion. I was positive a plane had just crashed into the mountains. When I unzipped my rainfly to see the burning wreck, I was instead confronted with the most spectacular scene. The rising sun backlit enormous golden raindrops and painted a double rainbow that arced over the Cathedral Group. In the span of thirty seconds, lightening hit three of the highest peaks. The iridescent flashes, visible under closed eyelids were immediately followed by the most cataclysmic thunder, echoing across the valley. With the hair on my arms standing up, I was reminded of the awesome power of the earth. Made to feel small, but certainly not insignificant, I felt unbelievably alive.

I am a trained naturalist and geologist. I can nerd out on rocks, plants, and animals all day. While I am especially familiar with the ecosystems of the Pacific Northwest and the Greater Yellowstone region, I am eager to learn about other places.

I have co-authored a cookbook with a friend and love to cook.

Once upon a time, I thought I was going to be a potter. I'd love to share my skills in pottery with anybody who's interested.