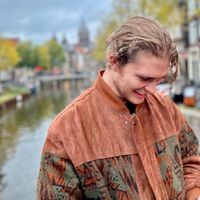 Been living primarily in Uganda for a big chunk of the last 5 years now. Started out as a Peace Corps volunteer but found my passion working with smallholder farmers. After a few years of trying different projects and trying to get a business off the ground I landed with an EV and battery tech startup 3 years ago and things finally started to work out. Currently building electric two wheel tractors and other off grid energy, mechanization, and value addition services for smallholder farmers with the goal of improving incomes, food security and yields while encouraging the adoption of regenerative practices. Anyways I've got a ton of crazy stories from having to jump out of a moving taxi to sinking a Landcruiser in the mud in the middle of a safari park (without a tour guide) and having to walk 5kms at dusk through lion, cheetah, and leopard inhabited territory to get to safety.

My bio 5 years ago &gt; Love people, culture, parties and everything that isn't what I grew up with. I graduated last December and instead of starting a career I'm off to see this big wide beautiful world for some indefinite period of time. I'm easy going, respectful, and full of good cheer and spontaneity. I'm a yes man to a fault but i'd say most travelers are. Adventure brings meaning to life. I love talking about politics, literature, philosophy, and economics but I promise I'm not intense all the time, I value small talk and comedy just the same. I've had a wild ride so far and it's only just begun. I will eat anything you put in front of me although I like to think I have a palate for good food. culturally Texan yet cultured and liberal minded. Just looking to have a good time, grow as a human being, and do good things!

I haven't had a stable place of my own over the last 5 years so I haven't been able to host but I look forward to paying back all the generosity and good vibes from those who have hosted me once I settle down in a decent apartment of my own. Couchsurfing has changed my life and I've met some of the most genuine people in the world, a few of which became some of my closest friends and still are to this day. Couchsurfing is something truly special.

Music (there are phases)

Lost Horizon, Working Days, Another Man's War, Autobiography of Benjamin Franklin, Surely You're Joking Mr. Feynman, The Alchemist, Kitchen Confidential, Albert Einstein His Life and Universe, Man's Search for Meaning, A Universe From Nothing, Notes From the Underground, Capital, Death in Venice, Goodbye Mr. Chips, Tales of Mystery and Imagination, Barbarians at the Gate, Sapiens

Spanish to beginner/intermediate non-native speakers. I'm good with grammar and linguistics and can help break down and explain things in layman's terms

Basics of electronics, batteries, and electric vehicles. I'm not an engineer by trade but I've helped build and repair lithium-ion battery packs, installed some solar, and worked on prototype builds for smaller electric vehicles

Personal training. Though I'm not in the greatest shape of my life right now I know a lot about weight lifting and cross training and have helped a number of friends get the ball rolling and start the process of getting in shape.

My good cheer
Help around the house and handy work
Great conversations
Good food (I'm a decent cook when I want to be)
Wild and entertaining stories from my poorly thought out adventures
Agroecology, farming, farm-mechanization, and gardening