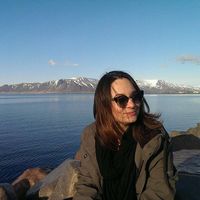 Well, I'm a 24 years old French girl who lived in Reykjavik for my last year of Bachelor.
We recently arrived in Mulhouse, because of my bf's new job BUT I had to move to Aosta (Italy) for work too ...
I AM LIVING BETWEEN MULHOUSE AND AOSTA UNTIL APRIL 2020. It's easier for me to host people at the last minute.

I'm travelling as much as I can. I was studying Cognitive Linguistics and I'm now preparing a Master's to be fully qualified as a French teacher, found of history, cinema, I'm open-minded. :)

Feel free to drop me message if you want to go grab a beer, a glass of wine or a coffee ! :)

A tiny presentation of my partner in travel/crime who lives with me in Mulhouse :
Pierre is a brand new chemical and environment engineer and travel expert ! He loves animals and nature, but also food (even if he is not really good at making it, I am the one cooking jaja) and beers ! He speaks fluent Spanish and he's not bad at English. (if you want to check him : https://www.couchsurfing.com/people/pierre-conquet )

I met up with lot of people when I was living in Lille. I've met an amazing guy who hosted me and my friends in the North of Iceland, that made me realize how cool this platform is !!! And now I'm surfing hehe.

I tasted some tabasco shooters, and i did a short movies marathon. (not really amazing)
I slept in a SUV with three other girls by -15°C for four days.. (I guess it's crazier than the first ones)
Got stuck between two rivers during the rainy season with an SUV and crocodiles around. Was fun.

I'm speaking fluently 2 different languages, and I know how to cook vegan. (I can also leave some origami crane around when i'm stressed..!)