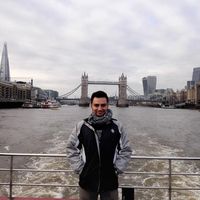 (1) Couchsurfing is a cultural exchange programme to meet people around the world. of course, a QUALITY TIME also needed to be spent together in order to know each others better. Hence, please read my profile carefully, don't treat me like ROBOT. DON’T JUST COPY and PASTE MESSAGES FOR OTHERS TO ME.

(2) Imagine, how awesome is for being kind enough to write a reference which reflect your real feeling toward me after I spend valuable time with you, guiding, accompanying you or host you !

I am student of life. I believe mankind should never stop learning !

Prior reading my profile, probably looking at my photos enlighten you more about my life style. If you want more information related to me, may my Facebook helps you :)
https://www.facebook.com/zhwan.dilshad1/photos_albums
I am ambitious, punctual, patient, tolerant, romantic, educated, traveler, environmentalist, open minded, kind, gentle BUT like adventures ! sometimes crazy and funny (not always :P)

During my childhood I always watched documentaries and movies on TV, showing performances of different cultures, people, traditions, rituals and so on. I have been always asked myself "why I don't go out to the world instead the world will come to me?!" Therefore, I decided to study abroad. My selection was Malaysia due to its multicultural, diverse and considerably tolerance values here.

I use Instagram, Facebook, and Google search engine to find amazing destination and like-minded people. However, meeting face to ace is the testier spice of life. You can enjoy sharing your stories, travel plans, life ideas, values and any other related mindset with me. I am very happy to find the soulmate. When we meet, I usually bother my mates by asking them to take numerous photos taking advantage from beautiful landscape, clear beaches, green mountains, wall arts, new foods, sport activities or even just under the blue sky :D

I consider myself somehow good cooker (not too much hehe) , but don't expect to cook for you if you won't :P hehehe It's quite difficult to describe myself in the right way... Hence, who interested basically in my profile may find out it by the best way through meeting me! :)

#Live simple, don't be complicated just enjoy it.
#Don't be afraid of failure, You won't success in life unless you taste the bitter of failure.
#Be yourself but respect others too as themselves.

I have found Couchsurfing a beneficial site to meet people, make new friends from different cultures, and getting better experience skills from varieties of information sources.

I've met, hosted and surfed many people around the globe.

Photography is my hobby.

Vietnamese coffee is my favourite. miss it !

I had many funny experience in my life, the summary is here:
-Being in Langkawi in Christmas 2012. I tried to swim in the sea although I haven't known how to swim at all that time !
-First time diving in Perhentian island eventhough my diving skill was nothing! :D
-Walkinjg and going out with thin clothes during snowing in England.
-Going to Thailand. Trying elephant trekkeling, Tiger show, Thai traditional shows and snorkeling in very clean sea water. plus monkey feeding :)
-Running, jogging and enjoying unsual cool weather in cameron Highlands which it is uncommon in Malaysia.
-Climbing mount Kinabalu in Sabah, Malaysia. Going inside clouds over the mountain :)