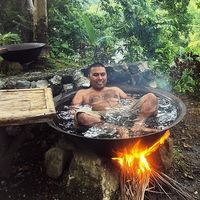 Note: Due to Coronavirus will be selective who I am hosting.

Back to hosting this time in Ampang.

I love travelling and lived in many Middle Eastern countries, Canada and Indonesia due to my father's work.I came back home in my teens to finish off school.

I did my undergraduate in the US and work there for a while too. I completed my Masters of Science in Environmental Entrepreneurship in Glasgow, Scotland at the end of 2011.

I had a great time there, climbed up Goat's Fell and Ben Nevis (highest mountain in the UK) was among the highlights of my hiking over there.

It was also where I discovered Couchsurfing. Change me forever!

I like the outdoors and historical sites. I will plan my travels around these activities.

My latest hiking achievement in 2016 was to reach the peak of Mt Rinjani in Lombok, Indonesia. It was a tough climb.

I did 3 months of backpacking exploring America in 2017. I loved it!

I look forward to meeting fellow CSers residing in Malaysia and the world.

Understanding others without being judgemental.

I am up for coffee/drinks and short travels here and there.

One of my regular contributions here in CS is to bring Csers to waterfalls and hiking sites in Malaysia. It's a whole lot more different than Western hiking!

I have been hosted by great people in Belgium, Germany, Scotland, Spain, France and Netherlands. I tried "squatting" in Utrecht. My CS experiences have been a blast! I participated in the CS Edinburgh Rocks and Braderae Lille, Event. It was mad fun.

I also spent 3 freezing nights in Australia at CSer's backyard in a tent. An experience not to be missed :)

I completed a South of Spain tour through Andalusia, Valencia and Madrid and was hosted by amazing CSERS. I can speak more than 200 words in Espanyol!

Over here, I've been to some happening CS events. Locals are just as crazy as other CS counterparts in the world!

Indonesia from 2013 to 2016 remains my all time surfing spot. I have been hosted and traveled with wonderful people over there.

I was genuinely surprised that I was hosted frequently in America since I was not a blonde 😆. For 2017 America is up there on my favourite place to surf.

Travelling, trekking, badminton and a big fan of local food.

Sci-fi and fantasy books. I am currently reading Song and Ice Trilogy by George C. Martin, HBO's making the first book called Game of Thrones into a series.

I like world folk music. In Malaysia we have the Rainforest Music Festival every year. Been there twice. I am into alternative bands like Nirvana, Pearl Jam, Alice in Chains, Rage Against the Machine, Red Hot Chilli Peppers, Staind, Evanescence and Beastie Boys.

I was a volunteer in Aceh after the Tsunami in 2005. I have been on several humanitarian missions with some local NGOs in Malaysia. I would like to do that more,looking to contribute in short missions in Europe if possible.

I hiked up Ben Nevis the highest mountain in the UK, the view was amazing.

I squatted with a Dutch couple in Holland. It was an eye opener to living within your means and nature. It was a wonderful experience.

If you like spicy food its something I can try cooking for some people. Teach people Malay. I would like to learn as many new languages as possible.

If you liked advice on Indonesia and other places in South East Asia, Asia, America and Europe I would be happy to share tips.

I have loads of maps and travel books to share for your trips in Asia.

I can give travel tips and hook you up with some friends of mine if you are going to places I have been.