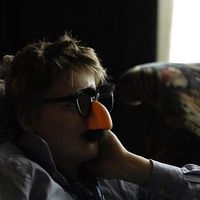 Central European executive transvestite realness realness. 🥨
Many of my ancestors were called Josephus Aloysius Reibli.
I believe in Werner Herzog.
I never lie, which sometimes leads to very awkward conversations.
I perceive reality as a prison which I am constantly trying to escape from. I think it's the only way to cope.
If you like sick jokes, there is a chance you will like me.
This is my stuff, I think I have the least followers on this planet: even my friends and family couldn't be bothered to follow me.
http://travelspartlyintime.tumblr.com/
I am a massive fan of RuPaul's Drag Race and the QI series.

Because I like meeting new people and because I travel a lot.

When I was 18, with my friend we took a trip. from Hungary to Denmark, we travelled with a 33 year old hippybus, Eddy. Ever since that I'm nomadic.

I speak a few languages: English, French, Hungarian fluently. I've been learning Ancient Greek for two years actively, and Turkish for a year.
I have a diploma of litterature but I also study stuff like linguistics, foreign languges, art history so i guess that's something i can teach.

There a re a lot of languages in my head. I can teach you languages.