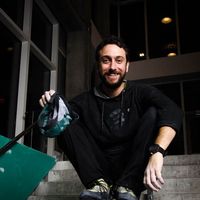 To figure out what to do with life.

More specifically: Right now I am trying to finish with some affairs in NYC. I intend within the year to figure out some way to leave everything here and go travelling long term. I am not sure how things will work out. If I do really well in business within the year I would like to buy a multifamily home and leave a part of it for couchsurfers to visit while having the rest pay the mortgage bills. If you know anyone who can use help with real estate in NYC you can help this dream become real.

Most of my profile was written years back but I find it still jives with me a lot so I keep it up here for the fun of it. At the present point in time I am living in Queens, one of the 5 Awesome boroughs of New York City.

I got settled in NY after college without meaning to and now have spent years working here. I think I always knew that I would need to hit the road again and see the world before I could really be a properly motivated member of society. Anyhow, I built a business, have a job, a solid relationship, and now am figuring out how to cut my ties and head back out. For the Next year though (Through 2018) I will probably still be in NYC, and hopefully in the apartment I came to really enjoy in Forest Hills, NY. Being that I will be single for the first time in years and I really love hanging out with fellow travelers I will probably be up for hosting quite a bit.
_________________________________________________
THATS ENOUGH INFO FOR NOW...
Here's some stuff I wrote years ago which I leave up here because I still like it, and I am an idea horder like that :)
_____________________________________________________
Oookay, as much as I did like my old things written here it is about time I updated this. I am living in Queens a borough of NYC right now. As of sometime this coming summer I will have been on couchsurfing for a year, and I must admit it is really awesome. I have met so many cool people through it.

Some real info about me though:

As with many of us I am in search of meaning and in the attempt to figure out life. I know I am no where near figuring it all out, which is kinda cool cause it means I get more time of crazy ass adventure in the attempt of learning about the world.

I like to think philosophically and stuff like that but at some point within the past few years I discovered that the main thing I think people are lacking these days is experience in the world; so I am trying to make up for any lost time. All right I am done writing in this section, I guess to really learn about me you'll actually have to meet me :)
(May 10, 2009)

I'm searching for this. I grew up really religious and am now skeptical. I have put true philosophical thought on the backburner for a little while as I find the way most philosophers have gone about it to be kinda depressing as well as not getting a feeling that the subject matter was really relating to myself, which i feel it does. I think it is very important for people to know what they live for, but that knowing comes from thinking about it, not from blankly accepting the way you grew up. Hopefully traveling will help me figuring this stuff out. At the moment I think that opening myself to different experiences and cultures can definitely do this.

I haven't been very active in the past few years. I do love couchsurfing though as well as the whole hospitality generation it represents so I intend to get more involved again soon.

This section has multiple updates at the end but I kept the old stuff because I like looking back at it :), and still agree with my old self's seniments

So far my experience is just looking at the site and I am digging it sooooo much. Just the way people talk in such an objective and true to reality sort of manner is such a breath of fresh air. (example: when asked about occupation "How do you occupy your time here on this earth?" IT'S PERFECT.)

Really hoping that within the next few months this part of the profile can have much more to add to it.

Well a few months have passed since I joined this site, and I have gotten into the CS community IN New York City. It Is truly amazing and I have been having been enjoying New York so much more since joining it. Anyone who lives in NYC or is visiting should definitely check it out.

I haven't done any serious couchsurfing through this site, though I intend for that to change soon in my upcoming trip to Europe, which will hopefully begin in a couple of weeks (end of October 2008).

ANOTHER UPDATE :
(yeah, I like being able to look back at old stuff I wrote)

I have been CouchSurfing through Europe for two months now and absolutely love it. I have been host by really amazing people, and have been meeting so many awesome people through the site.

To start I am constantly looking for new interests.

I like music, at the moment mostly punk, rock and acoustic rock. hmmm I suppose this stuff really should have gone in the music section.

I've been picking up how to play guitar in the past year, and been making attempts at writing songs when im in the mood for it.

Beaches- growing up I hardly ever went to the beach, so im hoping to make up for lost time now.

I love wilderness and animals. I don't own a pet at the moment, but I had a few growing up. animals can express emotion in a way most humans don't under normal circumstances, and I feel it can help us develop our selves by experiencing a relationship with an animal (meant in the most platonic way possible). Personally I'm a dog person. I actually have a slight allergy to some cats, though I try to live as if it doesn't exist.

I find it hard to pin this down to any categories, though i do have some specific tastes. In general I don't like horror films, or anything very gory. when I was a kid I used to get scared of all kinds of movies, even the wizard of oz freaked me out a bit, so I think I've grown a lot since then, but am not expecting to like true horror any time soon.

As I said beforehand I like Punk, and rock music.

As stated before I think this site rocks in it's approach. I suppose I can teach a lot about Judaism as most of my life I have been very religious and I have studied it a lot. This doesn't mean I can answer everything about it, I'm not sure if anyone can really. I have a decent understanding of most sciences I think, and am decent at most forms of math before calculus.

I would like to get a much better grasp on the situation the whole world is in at the moment. I'd like to have a real feeling for the fact that so much of the world is starving and living in poverty. It seems like such a significant thing to me which is on my mind way to little. I'm hoping that traveling to third world countries will help me to truly appreciate the state the world is in. After that I am going to fix it. You'll see. I'll figure out some sort of cultural systems to help matters out. At least I hope I can do something.

Oh yeah It would also be nice to learn some more languages along the way, to learn how to dance a bit, and to learn firsthand about many different cultures and people.