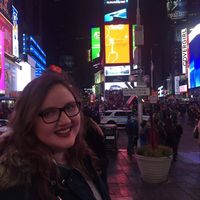 I consider myself as a friendly person. I hope that other people can agree with that ;) I can be shy at the beginning or totally on the contary! It depends on... Well, I don't know on what it depends.

I like meeting people from all over the world and I think that the most interesting thing in traveling it's not visiting monuments but meeting the locals and learning about their culture.

I don't think I'll be original if I say I love traveling ;)
I also like learning languages, listening to music, watching series and I'm a huge fan of NBA!

music: almost every kind of music, above all rock, ska, reggae

I was a scout so I used to do things like living in a forest for a month, sleeping in a military tent on the bed made by me, eating terrible food and having fun with crazy people!

I can teach you something in Polish (even it's quite hard:D) and everything you want to know about our culture.
Since I'm studying in Spain, I can help you with Spanish as well ;)