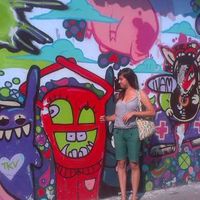 I believe in good in people.

I can't host anyone at the moment cause I'm still in a search for flat, but I'll be more than happy to show you Belgrade, grab a beer, go to party and help people to feel comfortable in Serbia as much as I can :)

I'm still new here, but I've been hosted by some great people when I was travelling with my best friend who already had a profile on CF.

I am kind of an addict when it comes to online learning. Currently, I am taking a course on Scandinavian cinematography :)

I'm not a fan of some spesific music genre, there are just some artist I get addicted to from time to time. At the moment, that would be Jamiroquai, Stromae, Faithless, Scissor Sisters but I also enjoy listening to Lily Allen, Lady Gaga, Die Antwoord, Mika, Chemical Brothers and many others.

My favourite book of all time is The picture of Dorian Gray, but my favourite authors are Herman Hesse and Haruki Murakami, if I should choose any spesific novel from them that would be Steppenwolf and Norwegian Wood. Also, I'm a HUUUUGE fan of Harry Potter books, I grew up with them.

When it comes to movies, I love those which shock me, confuses me and bring some strong emotions. One of my favourite are Schindler's List, The Hunt, The Intouchables and Factory Girl. And I'm a big fan of Wizard of Oz and Alice in Wonderland.
There are also some tv series I enjoy very much, such as Lost, Friends and Game of Thrones.

During the World Cup in Germany I was one of the flag bearers for Serbian team, it was great to be part of something that big.

One more thing I really enjoyed doing - working as an extra on the set of Game of Thrones. It was like time travelling :)

I could share my experience about travelling and learning languages. I really like torturing foreigners with some difficult Serbian letters xD
Thing I'd like to learn is how to cook.