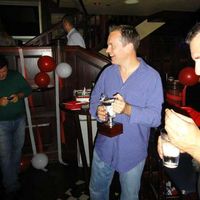 I'm from Bantry, Co. Cork in Ireland, but I've lived in the Atlanta area since '97 after spending 4 summers prior to that in the states - New Jersey primarily. I'm into my third career at this stage having been an architect and a teacher.

I'm currently dabbling my toes in the world of startup technology. As part of that process, I'm having conversations with people about how they spend their free time. If you're up for that kind of conversation, I'd be happy to buy you a coffee in exchange for your time.

I'm basically here for the cultural exchange and to be part of the broader community. I have to say that I haven't partaken as much as I would like because I'm unable to share any part of my own home at the moment. As I mentioned above, I'm also hoping to tap the braintrust of the community to see how they find the cool things that they do while they're on their CouchSurfing adventure.

If I had to say one thing that interests me over all others, it would be how teams and groups improve, and how the individual maintains his or her integrity during the process.

After that, I spend a stupid amount of time watching sports - soccer, hurling, rugby, and gaelic football are my favorites.

Music:
If I'm trying to relax, I put on the Brazilian or Bebel Gilberto channels on Pandora. If I'm planning to think, I'll put on "My Silver Lining" by First Aid Kit, or "This Time" by DJ Shadow.
If it's my intention to party, then I'll throw on Flo Rida or Don Omar, and see where the YouTube channel takes me.

Movies:
Seen a bad Leonardo DiCaprio movie yet? Me, neither. I guess Shawshank Redemption would have to up there as one of my favorites of all time.

Books:
Season of Migration to the North, All the Light We Cannot See, Memoirs of a Geisha, and 'Tis are all books that I've inhaled.

I've just finished reading Originals by Adam Grant and that was an amazing non-fiction book. I admit to having been overly influenced by anything by Malcolm Gladwell and Drive by Daniel Pink.

I coached the Atlanta camogie team to a national title. That was pretty amazing.

Actually, the amazing part was evolving myself over the course of my coaching career. Took a long time.

Also open to sharing a game of soccer, a cup of coffee or tea, or a walk.

I'm open to being a conversation partner for anybody learning English, particularly if you speak Spanish.

I'd really like to learn how people choose or find the things they do in their spare time. Message me if you're open to a conversation about that. It would really help my research.