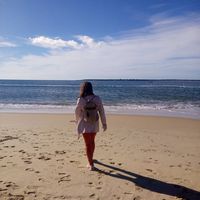 We've recently moved to the Netherlands with my husband to start a new life here after having lived in France and in Hungary.

Actually we live in Zaandam which is a smaller town just a few kilometres from Amsterdam. We are open to meet new people, either locals or expats to exchange about diverse topics, such as Dutch culture, being an expat, economy, politics, music etc or just bike together around the beautiful canals in Amsterdam! Feel free to drop me a message!

Judge a man by his questions rather than his answers.
-Voltaire-

just with bringing my curiosity and my smile... :)

I have only supercool experiences so far, so much fun with sooo many people...

First of all... I'm interested in YOU, dear couchsurfer: Your life, your ideas,your opinion and your experiences... but apart from that we can talk about languages and cultures, economics,politics,history,books and music while we are drinking a good wine or beer :)
So let's talk and share ideas!

Bulgakov - The Master and Margarita, Sienkiewicz - Quo Vadis, Salinger - The catcher in the rye, Kesey - One flew over the cuckoo's nest, Doyle - The adventures of Sherlock Holmes, Orwell - 1984, Animal farm, Muriel Barbery - The elegance of the hedgehog,Harry Potter, The lord of the rings, The game of thrones, and other marvelous pieces of Hungarian, Italian, French and Russian literature.

Movies: Cast away, Dead Poets Society, The departed, Good Will Hunting, The Lord of the Rings, Batman, Inception, School of rock, Before Sunset,Intouchables, The Prestige, Italian and French movie classics

Series: Lie to me, Sherlock (BBC version), The game of thrones, The Big Bang Theory

every Saturday night in Budapest.. (especially those that end with falling into the Danube accidentally :)

I can teach you how to spell Egészségedre! (Cheers) in Hungarian ( the secret is the practicing :) )
I can go dance with you ( I really like dancing!)
I can help you decide which are the best Hungarian wines!

And here is a list of interesting things to do/try/see that I highly recommend if you visit Budapest: