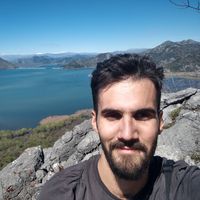 I'm an easy-going guy that lets things happen in life and also makes them happen.

Currently living in Granada till August.

Doing things I would regret not doing.

Originally I joined Couchsurfing because it's an amazing way to travel, meet new people, broaden horizons and experience things from a different point of view!

Right now, since I work remotely and basically became a digital nomad I wanted to use CS to just meet people wherever I live abroad!

I like a lot of different stuff - music, comedy, travel, history - I am interested in just about anything that comes by and very open to learning about new stuff.

I enjoy a huge variety of music, but mostly all kinds of rock in different languages - stuff like The National, Triggerfinger, Fugazi, Fu Manchu, Leningrad, Katarro Vandaliko, Villagers of Ioannina City, Jets to Brazil, Morphine, Tango With Lions, etc. I could bore you to death and go on for way longer listing bands that I like.

I don't really watch a lot of new movies, but the last one I saw in cinema was The Joker which was great.

My favorite book of all time is Hopscotch (Rayuela) by Cortazar, followed closely by The Hitchhikers' Guide to the Galaxy.

I went on the 2016 Mongol Rally in a '99 Fiat Panda, which only made it to Turkmenistan - but I travelled on through Central Asia. Seen a lot of amazing stuff, like the famous Gate to Hell in Turkmenistan...

In many ways that trip changed my life completely, and is probably still the coolest thing I've ever done.