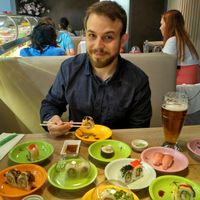 Nerdy weirdo with a typical Czech sense of humor and a slight addiction to fragrances and aviation here. [insert random sentence about passion for traveling]

I've got a remote job in marketing, started the digital nomad lifestyle and then shit hit the fan. Came back to my hometown Brno after 7 years and I'll be glad to at least get a sense of traveling again by hosting fellow Couchsurfers.

Used to be a tour guide in China as a side job, who would have thought I'd get paid to travel lol.

One of my best friends described me as a cynic asshole with an actually good heart. Go figure.

It started as a budget traveling option during my study years and quickly became my favorite form of meeting new people.

I've experienced one of my best adventures with other Couchsurfers and I just love the community! It's easy to click with people here.

I grew up listening to rock, metal, metalcore, hardcore and all this kinda stuff. My favorite music remained but I sometimes mix in electro or hip hop, pretty open to any style.

Won't say no to an extended LotR version marathon.

Let's say that I was one of those annoying people who read ASoIaF before the TV series. Doing that with The Three-Body Problem now.

Spent NYE in Mexico with local Couchsurfers who I convinced to go see the sunrise on the other side of the island of Cozumel by bike in a complete darkness at 4am.

I already educate people about marketing and SEO worldwide so I can share my knowledge with you as well.

I'm also a solid cook and my mum says that I'm smart so you might be in for a good conversation.